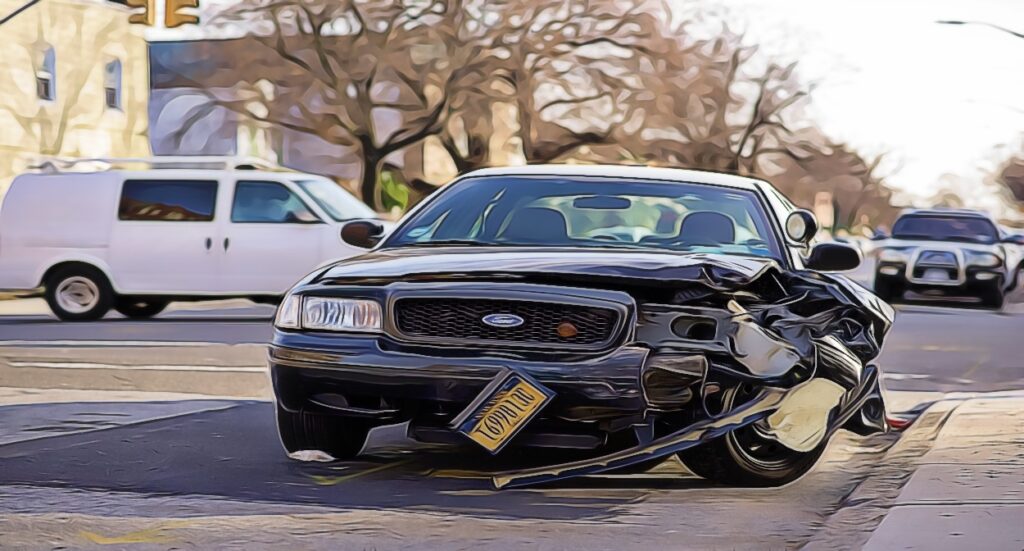 A few hours before leaving on my family vacation last week, I was running errands around town when this happened…

I was in my car, idling in the intersection turn lane, waiting for the left-turn arrow, turning the radio to another station. Not a care in the world…

…and then the airbag exploded in my face.

I shook my head and returned to my senses – kind of the way Wile E. Coyote does after an anvil drops on his head.

I got my bearings, looked out the driver’s side window, and  saw it: A big pickup truck hauling a trailer with a giant, cylindrical tank (Water? Fertilizer? I couldn’t tell).

The truck had turned left onto the road I was on, heading in the opposite direction.

The driver cut the turn too tight, WAY too tight.

That tank wham-bammed the front of my car.

Pieces of my headlight, fender and side panel littered the roadway.

I hopped from my car. The truck/trailer had stopped but was now inching forward.

It was obvious the driver knew something happened.

I began waving, expecting the driver to acknowledge me and pull over.

This was a four-lane road, and the truck was in the right lane. So the driver could have stopped there.

But they kept inching forward, slowly at first, then faster.

Maybe the driver was looking for a place to turn off the road.

But the truck kept going. And then it was gone.

I wasn’t injured. And insurance will pay to repair or replace the car.

But I still feel damaged. Cheated. Robbed. Ripped off.

My first time as a hit-and-run victim…

Those emotions didn’t ruin my time in Mexico, but they occasionally circled my mind like vultures – when I was on the beach, out fishing, or eating with my family.

They occasionally circle my mind still.

A couple of takeaways from this…

First, I’m better than I used to be at putting away frustrations. But I have room for improvement. My anger and frustration does not consume me, but it occasionally distracts me.

For years, I’ve practiced ways to set aside the distractions, to focus on things I can control.

This is about mindset, and it’s not one of those learn-it-once-and-be-done-with-it things.

Strengthening your mindset
is an ongoing practice,
not an event.

I hate feeling cheated, robbed, ripped off, and I never want to make someone else feel that way.

I won’t mistreat you.

I won’t hit and run.

I won’t bait and switch.

I won’t make you feel the way I felt when that truck and trailer disappeared down the road.