The Great Peanut Fiasco and What it Reveals for Your Business 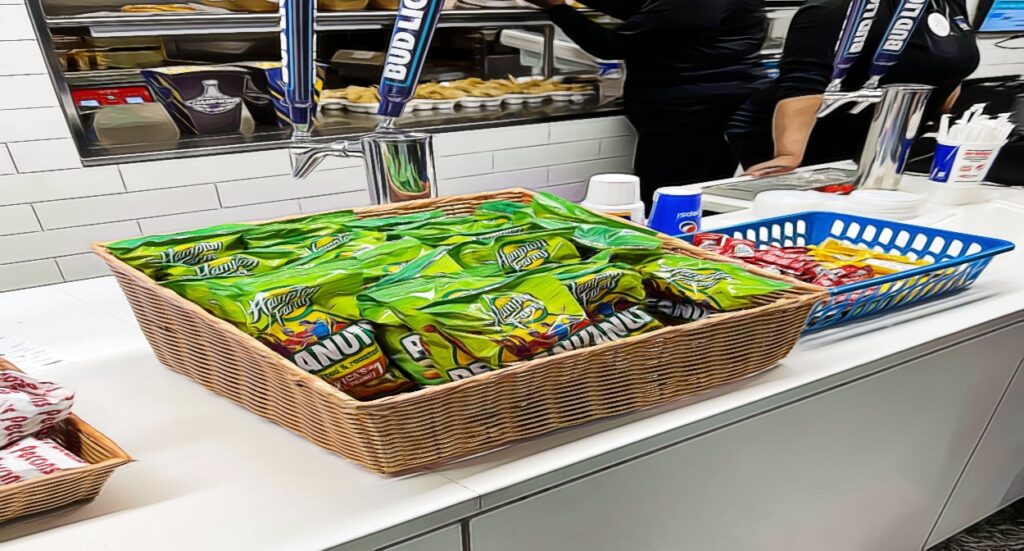 All I wanted was a friggin’ bag of peanuts!

Last night, at the NHL hockey game between (my beloved) St. Louis Blues and the Pittsburgh Penguins, I had a hankering for some salt and crunch. Peanuts in the shell. Some water to wash ‘em down.

It was between the first and second periods so the concession stand crowds were long. But I found one of those stand-alone beer carts with a shorter (10-people deep) line.

Taped to the cart’s awning was a printed sign with menu options. The last two menu items: Peanuts and bottled water. Bingo.

Six minutes later, I was at the front of the line and ordered:

“I’ll have a bag of peanuts and a bottle of water, please.”

The beer cart guy gave me one of those sideway glances that said without saying, “Yo! This is a beer cart, not a water cart!”

Charmless, with a dash of misdirected anger.

That triggered my inner-snark. I smiled and pointed at the sign that said. “Mind if I tear the bottom three inches off your sign so no one else wastes their time?”

He didn’t smile back.

My quest continued. Around the bend, I found a concession stand that offered water and peanuts. At least that’s what the menu said.

This time, I stood in line for four minutes before ordering…

“May I have a bag of peanuts and a bottle of water?” I asked. This time, a question, not “I will have…” I’d learned not to assume these menus tell the truth.

The concession stand guy locked eyes with me, one of those looks that said, “Ohhhhh, you’re going to be sad, and I’m sad for you.”

Then he said it out loud: “Man, I’m sorry. We don’t have peanuts. But we have plenty of waters.”

I smiled at him, pointed at the big menu behind him and said, “This place really needs to update its menus.”

He smiled back, rolled his eyes and said, “Tell me about it.”

So I asked him if he knew any place else where I could find peanuts.

I was frustrated, but I appreciated his courtesy.

Sorry is a powerful word. Don’t be afraid to say it – when it’s warranted.

By this time, the second period was set to begin. So I returned to my seat, peanutless.

When the second period ended, I rushed from my seat, eager to beat the lines, ready to hunt for the elusive peanuts…

…but bracing for the worst.

Maybe the peanut supply chain is broken. Maybe there’s not a single bag of peanuts in the whole building, I thought.

But when I entered the main concourse and turned left, I saw it: At the concession stand immediately next to the place I sit, Section 115, a giant basket filled with piles of peanuts.

Sixt seconds and $5.75 later, I was cracking open my first peanut.

I’d satisfied my craving. But – holy moly – I had to work way too hard for it.

Turns out there were plenty of peanuts in the building.

But the concession manager didn’t distribute those peanuts around the building. Lots of peanuts in one spot. No peanuts elsewhere.

And the peanut-cravers were left wanting. Most who wanted peanuts probably gave up (how many peanut sales did the building lose last night?!).

The world is full of people who crave what you offer, who want to know what you know.

They walk past the beer cart that is your social media page.

They stop by the concession stand that is the front page of your website.

They would gladly buy your peanuts – er…I mean sign up for your email list – if you made it easier for them.

But so many business people make it way too hard to join their email list – or they do a lousy job encouraging people to join the list.

That’s why – a few hours before last night’s hockey game – I hosted a workshop called “5 Ways to Build Your Email List with the Right Prospects.”

One of the key ideas:

Make it easier for prospects to find you and get your “peanuts.”

Those who attended the workshop loved it. They got 5 tips in just 25 minutes and then stuck around for Q&A.

I didn’t record the workshop, and I wasn’t planning to run it again, but…

…then the peanut fiasco happened, and it reminded me: This is critical, business-building stuff.

You have valuable things to say, potential prospects to inspire, sales to close. They’re hunting for answers. But…

Prospects won’t hear what you say, be inspired to act, and choose to do business with you unless they’re on your list…

…unless you make it easier for them to find and get your peanuts.

So I’m thinking of hosting the workshop again…

…but only if I hear from enough people who are interested.

The smart folks who attended yesterday’s workshop began during the session to get more peanuts on more stands – and they’ll soon reap the benefits.

If you want to quickly discover how to build your email list with the right prospects, reply to this email and write “I want you to show me the peanuts” in the email message.

I’ll reply back with details (TBD) regarding the next workshop. I’ll try to set a time that works for you.