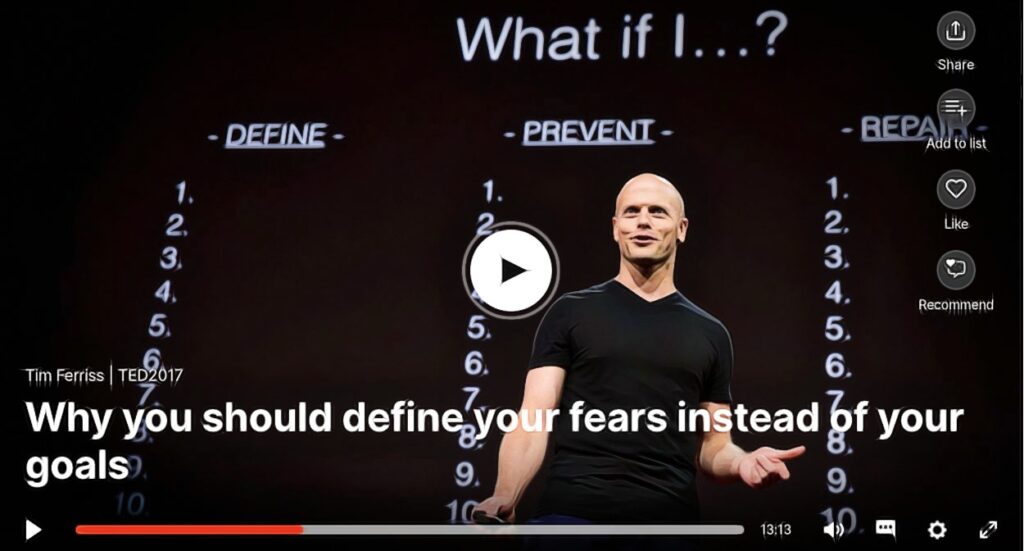 I’m a Tim Ferriss fan, but somehow I missed this TED talk he delivered in 2017. I discovered it on Friday when Tim mentioned in an email that 10 million people have seen the talk.

Tim delivers powerful stories about his mental health struggles and self-paralysis, and philosophies he adopted to function effectively. He shares a practice he calls “fear-setting” in which he envisions and records his fears so he can overcome them.

This is one of those videos I’ll again and again. It’s full of actionable advice for anyone who gets stuck.

I recently began paying attention to a content creator named Jeff Goins. I recommend his podcast and his blog.

In this post, he tells us about the time a drunken “bartender” pointed a gun at his face.

And he draws great lessons from this story about how to connect with and serve prospects and customers — how to be a better bartender.

Recommended Listening
Kobe Bryant: Storytelling and the Awareness of Fear

Most know Kobe as a basketball superstar.

Listen to journalist and podcaster Cal Fussman’s interview Kobe, and you’ll know him as a brilliant businessman and storyteller.

I don’t follow the NBA much so I was indifferent about Kobe in his playing days. But this interview, recorded in January 2018, made me a Kobe Bryant fan. I looked forward to what he would create after I heard him tell his stories. But just two years after this interview, he was killed in a helicopter crash.

This interview honors Kobe who was just getting started on a new chapter in his story.

Here’s a great cartoon from Tom Fishburne (a.k.a. The Marketoonist) that’s spot on…

In the post that follows the cartoon, Fishburne nails it when he says: ” Brand loyalists are loyal to a brand only as long as a brand complements their own life and priorities.”

Same could be said for content. Your readers, listeners, subscribers, and followers will read, listen, stay subscribed, and follow you only as long as your content complements their own life and priorities.

Note this QuoteSeneca on the Stories we Tell Ourselves

In his TED talk cited above, Tim Ferriss quotes the Roman philosopher Seneca the Younger. This quote reminds us: Our fears and worries are often stories we tell ourselves that are not real…

“We suffer more often in imagination than in reality.”