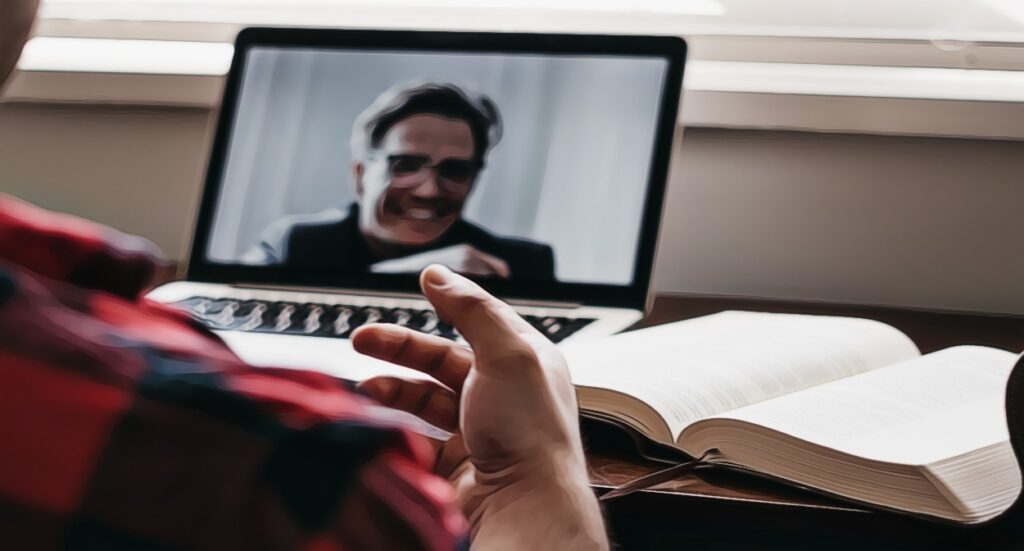 (Spoiler-Hint: Remember Al Pacino in The Devil’s Advocate, Robert De Nero in Angel Heart, or Jack Nicholson in The Witches of Eastwick? At first, they seemed like nice guys, too).

So I was happy to hear from Mark a few days later when he messaged me on LinkedIn and dropped this nugget:

“South by Southwest just sent me an email to get panelists and pitch people to talk. I thought of you.”

Wow! South by Southwest!? Mark thought of ME?

SXSW is an annual film, media, and music festival in Austin. A giant stage.

And Mark made it sound like he could pitch me to the organizers.

I was a bit skeptical.

“What do you have in mind?” I replied.

He said: “Let’s you meet with me next week online. I think you could possibly be part of a panel.”

I sent him my calendar link. He booked 30 minutes.

So began my journey
through the nine circles
of bait-and-switch hell.

Soon after our meeting began yesterday, I cut to the chase.

“Tell me about South by Southwest,” I said.

He rambled on and on about the importance of being heard and what a big deal SXSW is.

“People would die to be on South by Southwest if they only knew what it was.”

I already knew what it was so I asked, “Have you ever placed clients there before?”

He flashed a devilish grin.

Funny. I thought “placing” is exactly what PR people do…

So I tried a different tack:

“Have any of your clients ever been on South by Southwest?”

He paused and mumbled:

“Not that I’ve…uhhh…not that I’ve done. I just want to make you aware that you can go and apply..

After a long pause, he added, “Go apply.”

Thanks for nothing, Mark!

After he washed his hands of SXSW, he told me he books radio and television for his clients.

A surprising development since, moments earlier he said, “Placing is not what I do.”

He rambled on and on about the importance of “who you know.”

He bragged that he and the “author of Rich Dad, Poor Dad” live in the same town.

Imagine this, he suggested:

“If you were like sitting there and people could see (the author) inside your class, and you’re exchanging notes, and you’ve got some of the ethos off of that, would that help you?”

I wasn’t sure what he was getting at. The ethos of all that?

“If I was exchanging notes with Robert Kiyosaki and people saw that? What do you mean?” I asked.

He replied: “If you were in a panel with him, would that help you?”

This line of questioning sounded an awful lot like: “If you were on stage at SXSW, would that help you.”

I was no longer taking Beelzebub’s bait.

I was oozing skepticism.

I was in full Beelzebub-bashing mode.

“Would that help me? Sure” I said, laughing. “So are you saying that you could put me on a panel with Robert Kiyosaki?

Of course, I already knew the answer.

Bait-and-switch-‘bub mumbled: “That’s the IDEA, but not what I’m SAYING.”

Let that one sink in:

“What I’m saying is, if you could do that, that would help you.”

I laughed again, louder this time.

“If you go and you do local media, you can make yourself a bit of fame in your own town,” he promised.

Nothing wrong with that. I know local media coverage can help a business grow. And I know and respect lots of local PR people who are great at what they do.

But, most of my clients don’t live in my town.

More importantly, when you BAIT the hook with South by Southwest and Robert Kiyasaki and SWITCH to “lower-level,” local media…

I continued my journey through the Inferno.

“So you’ve talked about local panels and local events and local media coverage. You also mentioned national business publications, like Business Week and The Wall Street Journal. Do you do work with clients to get their articles…”

He knew where this was going. He cut me off.

Translation: When I mentioned national media, that’s what I was SAYING, but that wasn’t the IDEA.”

He asked me where I’m from. When I told him I was from St. Louis, he named a radio station where he once placed a client.

I’d never heard of it.

I held my left arm in front of the web cam, looked at my watch, and said, “We scheduled 30 minutes. And it’s half-past the hour now. I have to go.”

And then he pitched a scheme to help me “qualify for the pandemic relief money that’s out there right now… If we did that in, in Louisiana, it’s especially great if they’re hurricane affected or stuff like that”

Me: “Nope. No hurricanes here.”

Tornadoes. Earthquakes. Blizzards. And excessive heat and humidity. But no hurricanes.

He wanted to meet again.

He wasn’t catching the I-think-you’re-the-devil vibe.

I don’t know why. But I continued to dance.

Maybe I wanted to see how low he could go.

But meet with him again? Not a chance.

“Can you send me the information by email?” I asked.

Mighty agreeable for the King of All Demons, I thought.

“When’s the next time we can meet?” he asked.

I repeated: “Please send me the information. If I’m interested, I’ll circle back.”

If his mic hadn’t been fastened to a boom, he would have dropped it on the floor and done a little devil-dance.

But I was not about to let this demon win.

He mumbled something about all the work it would take to gather the information.

I told him to forget it. I didn’t want him to work too hard.

He insisted I needed the information. He promised to send it.

“If you text me your email, I’ll send you the information.”

The meeting ended, and 30 seconds later he messaged me on LinkedIn: “Nice talking to you.”

I replied an hour later with my email. “Will you send me the information we discussed?”

He replied instantly: “Ok. I am meeting with a (government) rep later today. After I do the meeting…we can talk.”

Welcome to the 9th Circle of Hell!

I told ‘Bub I didn’t want to meet.

He called me controlling.

“This isn’t how much control you can have, it’s how much love you can share,” he sniffed.

“Never mind,” I said. “We can end the conversation now. No need to send me the info.”

An hour later, he shot back: “YEAH but I am meeting with the guy TODAY. because the money supply thing, and the regulations may have changed.”

I will never reply.

You still have time to register for today’s “Ask Tom Anything” session. 4 p.m. EDT, 3 p.m. CDT on Zoom. Register here.

Show up and ask me anything. I’ll answer with no B.S. No bait-and-switch.

And I double-pinky swear I won’t say, “That’s the IDEA, but not what I’m SAYING.”

And I triple-pinky swear I won’t pitch pandemic relief funds.