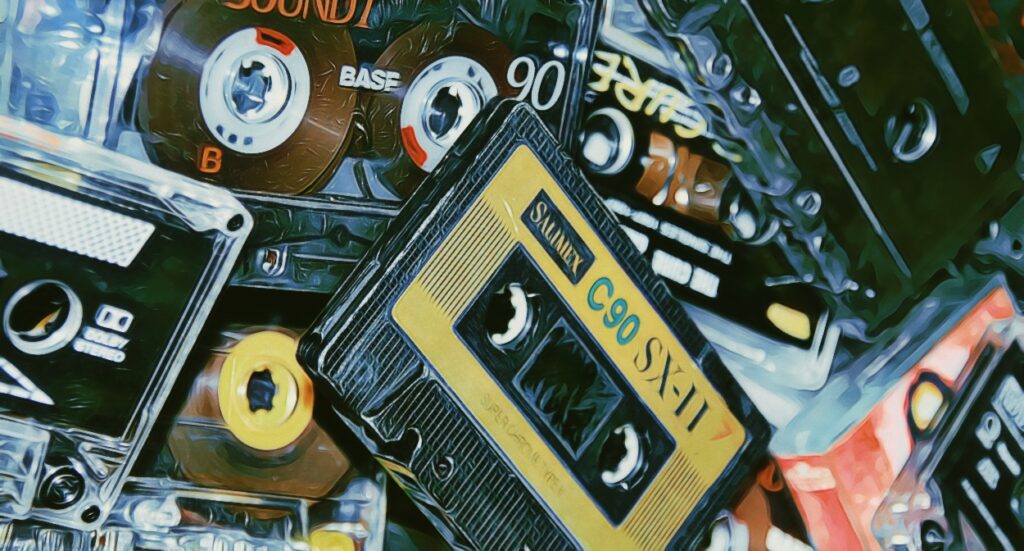 On my 14th birthday, Mom and Dad gave me two 10-packs of Maxell XLII-S cassette tapes.

Back in the early 80s, before CDs or MP3s were a thing, cassettes were THE thing.

I raided my friends’ record collections and taped my favorite albums.

I made dozens of mixtapes to play at parties, gift to girlfriends, or keep to myself as my life’s secret soundtracks.

I had hundreds of tapes, stored in cases big as microwave ovens.

…all those cases and all those tapes are rotting in a landfill.

But yesterday I learned…

…Maybe I should have kept those tapes.

Cassettes are making a comeback.

The Today Show said so.

Other media also have reported the trend.

I have one question:

I loved the 80s. But that doesn’t mean I want to return to big hair, clothes with shoulder pads, or TV shows like “Alf.”

Yeah, cassettes were THE thing in the 1980s.

The sound quality is rotten (hissssssssssss)  – and it gets worse with every play.

You have to rewind and fast-forward to find your favorite song (good luck finding the beginning of the song on the first try).

They wrinkle, crease, and unravel. (If you’ve ever spent hours fishing unraveled tape from your car’s tape player, you know what I mean.)

So I ask again…

…Why all the love for cassettes?

I saw one article that claimed hipsters drive the trend. Something about “ironic cool.”

Another article said consumers copy what they see on TV or in movies. See: Guardians of the Galaxy, Baby Driver, and Atomic Blonde for leading characters who love their cassettes.

And the LA Times radicals in our midst…

There’s also something about the tape revival that recalls the radicalism of the 1980s cassette culture: Tapes were cheap, and people used them to copy and share music from expensive records, an early form of piracy. In the Soviet Union, when I grew up, the state record company wouldn’t put out the music we listened to — so bands and underground entrepreneurs distributed them on cassettes.

from “Cassette tapes are making a comeback” (LA Times, 2019)

Maybe I missed the revolution. But when I was part of the “older cassette-culture,” I didn’t identify as a radical, raging against the machine. I wasn’t making some statement to reject the “dominant industry formats.”

…which leads me to a marketing lesson.

Every piece of media speculation I read or heard did not include a single quote from someone who purchased a cassette in this century.

No one bothered to ask a real buyer, “Why’d you buy?” (HINT)

Instead, the media dished out…

That’s what lazy reporters collect and dish out.

If you want to create content that captivates prospects, you have to discover what makes them tick.

Most marketers do this by pulling from their head what they think makes their prospects tick.

They outline their “prospect personas” on a white board or fill out a one-page worksheet.

And they think they’re finished.

Sure, we know something about our prospects and customers.

So we might get something right when we pull all of this from our heads.

But that gives us only a glass half-full, half-empty…

…some facts, but lots of theories, informed speculation, and educated guesses.

And that’s why most dish out content that doesn’t connect with prospects.

The story is incomplete at best — flat-out wrong at worst.

You captivate prospects and inspire them to buy when they see themselves in your stories.

That happens when you dig deeper, when you go beyond theories, informed speculation, and educated guesses.

That’s why I teach a simple, three-pillar approach to story discovery…

…so KNOW (note guess) why your prospects buy…

…so they see your content and say, “Yes! I can relate…”

When you get story discovery right and assemble content with the pieces you discovered, you fire up prospects and inspire them to hire you.

When you get it half-right or wrong, prospects tune out and move on.

If you want to get it right, see p.s. #3 below. I’ll show you a simple, scalable, delegate-able way to discover prospects stories.