July 20, 2021|Tom Ruwitch|Journey to the Past, Productivity, Why Story Power 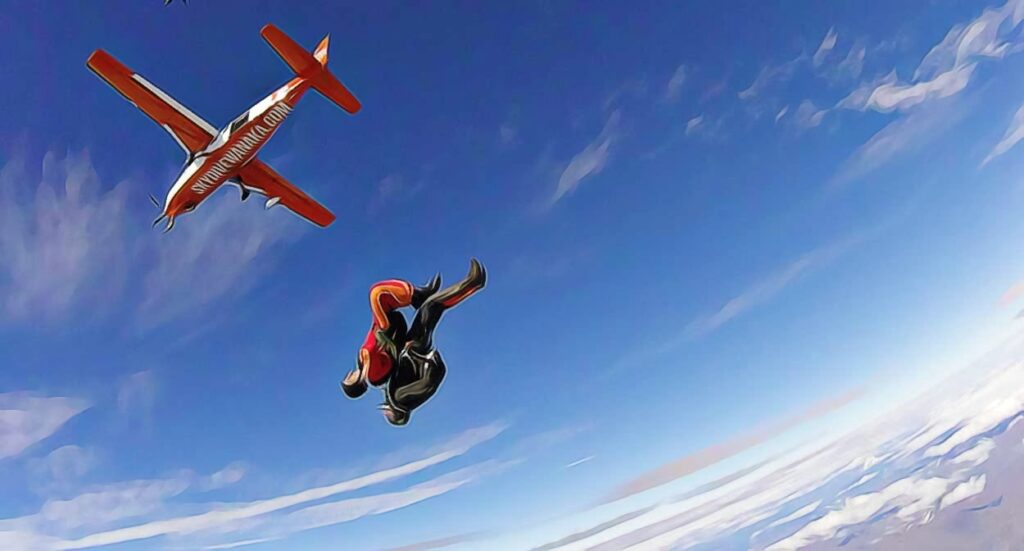 Here’s a picture at the moment of truth. Those are MY legs, hanging out of the airplane, 2.84 miles above Lake Wanaka.

…after I jumped, freefalling at about 200 feet per second. The plan: Freefall for 60 seconds, pull the chute, and spend the next four minutes floating to earth.

That guy on my back? He’s the bloke from the skydiving company. He’s the one who trained for this moment, who knows what he’s doing, who pulls the chute at just the right time, who keeps us from going “splat.”

At the United States Air Force Academy, 80% of the cadets receive freefall training.

Alan Parrington, the guy who ran the Academy’s training programs in the 1990s, recently described how US lawmakers used to gripe about the budget. They asked why the Academy taught 80% of cadets to freefall when half wouldn’t fly, and fewer than 5% of those who flew would ever bail out from an airplane.

Parrington’s reply: “During their first two or three jumps, the cadets were so scared they remembered nothing of the experience and only did what had been instinctively drilled into them during their training. In so doing, they learned to believe in their training, their leadership, their equipment, their service, and themselves which extended later into combat itself. I can’t tell you the number of letters I received five, 10, 15 years later…Graduates related handling combat stress to jumping out of that airplane the first time.”

So it goes in combat.

So it goes when guiding a tourist safely from an airplane to the ground in New Zealand.

So it goes in business.

Business feels like combat for many people. How does it feel for you?

When it’s time to write an email or blog post, do you freeze, or do you march ahead with clarity and confidence?

When you’re about to launch a sales presentation, do you feel like you’re freefalling, and fumbling to release the chute, or do you fall back on what’s been instinctively drilled into you and drift gracefully to the ground?

I spend most of my time these days training others to discover and craft powerful stories to help them grow their businesses.

But I continue to invest time and money in my own training.

Without that training, I might set high expectations, but I would fall more and achieve less.

Journey to the Past | Productivity | Why Story Power