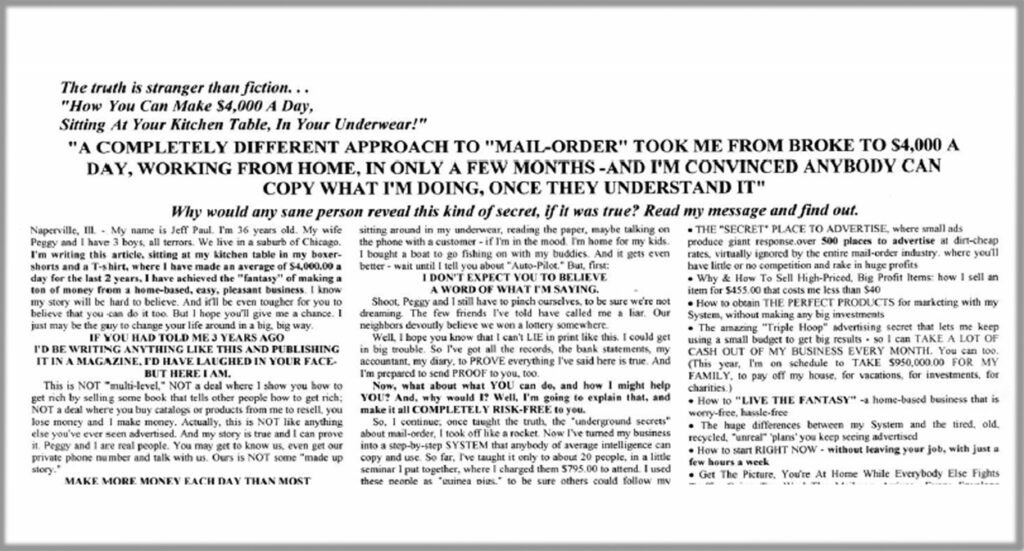 This is a story about how hardcore, ultra-conservatives found common ground with a bunch of hippies.

I know that seems unlikely these days, but it happened not that long ago.

And this happening is loaded with business lessons.

Our story begins soon after the turn of the millennium, in 2002, when the Internet was just an infant.

The title of the book: “How To Make $4,000 A Day Sitting At Your Kitchen Table In Your Underwear.”

With the help of Dan Kenedy (one of the planet’s great direct response copywriters), Jeff wrote a full-page advertisement. In the 8.5×11-inch ad, Jeff crammed three columns of 8-point (tiny) type that promoted the book or the $695 training course.

And here’s the crazy thing…

The ad worked best in these two publications: The American Spectator (political commentary for and by ultra-conservatives) and Mother Earth News (news and advice for back-to-the-earth hippies who want to get off the grid and minimize their environmental impact).

So…now you know. Ultra-conservatives and barefoot hippies like to sit at their kitchen table in their underwear — or at least they wish they could.

I shared this story with a friend who said, “Well, EVERYBODY, would like to make $4,000 a day sitting at their kitchen table in their underwear.”

The ad did NOT do well in every magazine, for every target market.

But it did extremely well in these two markets.

Many years later, Kennedy explained, “There is a reason the Mother Earth News reader and the American Spectator reader worked because they do have an important commonality. They’re as far apart, in many ways, as you could be. However, the commonality they share is a mindset of self-reliance. That they have in common. And this is a pitch about being self-reliant.”

And therein lies the BIG lesson.

When we define our target market, we often resort to demographics (age, location, income, etc.) or labels (conservative vs. liberal).

When we do this, we miss the mark. We tell feeble stories. Our marketing sputters. We waste money. We generate few sales.

When we focus on mindset, when we dive deep to understand what makes our prospects tick…

…We connect with them. We attract their attention. We keep them tuned in (have you ever tried reading a full page of 8-point type? You better be tuned in when you try!) We inspire them to act.

Last week, I hosted a free training that was all about understanding what makes your prospects tick, how to connect with them, how to attract their attention, how to keep them tuned in, and how to inspire them to act so…

…You can transform marketing from a confusing, resource-draining hassle into something that’s simple, fun and PRODUCTIVE…
So you can land more clients with fewer headaches.