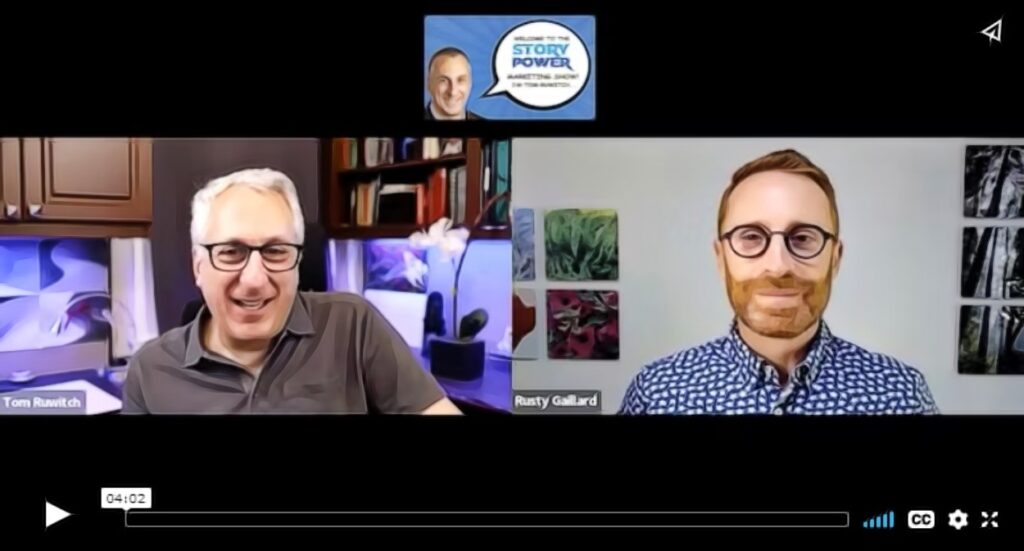 Recommended Viewing
Speaking with Confidence and Selling with Authority

My friend Jane M. Powers is a public speaking master who knows how to sell from stage. I learn valuable business-building strategies and tactics every time I hear her speak and talk to her.

Here’s a great interview she did with SalesPOP! — a digital magazine that helps sales leaders and entrepreneurs achieve success. This video is loaded with lessons about how to stand out from your competitors.

Rusty Gaillard understands the difference between BUSY and PRODUCTIVE.

He’s the former Worldwide Director of Finance at Apple who followed a traditional corporate path to success – from GE under Jack Welch, an MBA at Stanford, to 13 years at Apple.

He left the corporate world in 2019 when his external success no longer felt like personal success.

Rusty now works as an executive coach for tech leaders who want more success without sacrifice.

Rusty is a sought-after speaker and author of the best-selling book “Breaking the Code.”

He lives in Silicon Valley with his wife and 15-yr old son, enjoys playing in the rock band he started this year, and spends as much time as possible outside.

Discussed in this episode:

Full episode video and audio: here. You also can find the podcast by searching for “The Story Power Marketing Show” wherever you find your favorite podcast.

“Can you explain a hard idea using only the ten hundred most used words?”

So ask the creators of The Up-Goer Five Text Editor.

Type whatever you want in the box. But the moment you type a word that is not among the “ten hundred most used,” the app will send you back to the drawing board with this error message:

“UH OH! YOU HAVE USED A NON-PERMITTED WORD”

Think of some simple idea you want to share. Think of how you want to say it. Then begin typing. Revise your word-choice as the app gives you those “uh-oh’s.”

Then compare your finished product to what you originally intended to write.

Maybe, just maybe, you’ll discover the simpler Up-Goer-inspired version is better than what you intended.

Thanks to the great Ann Handley for telling me about this in her fantastic email newsletter.

Interesting Ad
For Ladies Who Waited for Elvis…

In 1958, Elvis Presley put his music career on hold and joined the Army.

But for every problem, there is a solution. Enter the “Forever Elvis Fan Club” and its “Ladies in Waiting” medallion.

ARE YOU GOING TO WAIT FOR ELVIS?” asked the headline on the ad for the Club.

If yes, you could pay $1 to join, and you would receive a free “Lady in Waiting” pendant.

“Let’s all remain faithful to Elvis while he’s gone and prove to the adults that we’re not fickle teen-agers,” the ad declared.

I don’t know how many people joined.

I’m not presenting this as some brilliant ad to swipe and copy. I just find it interesting and funny. A great historical relic.

All the other not-fickle teen-agers were left with nothing but a $1 pendant and a broken heart.

It isn’t what we don’t know that gives us trouble. It’s what we know that ain’t so.