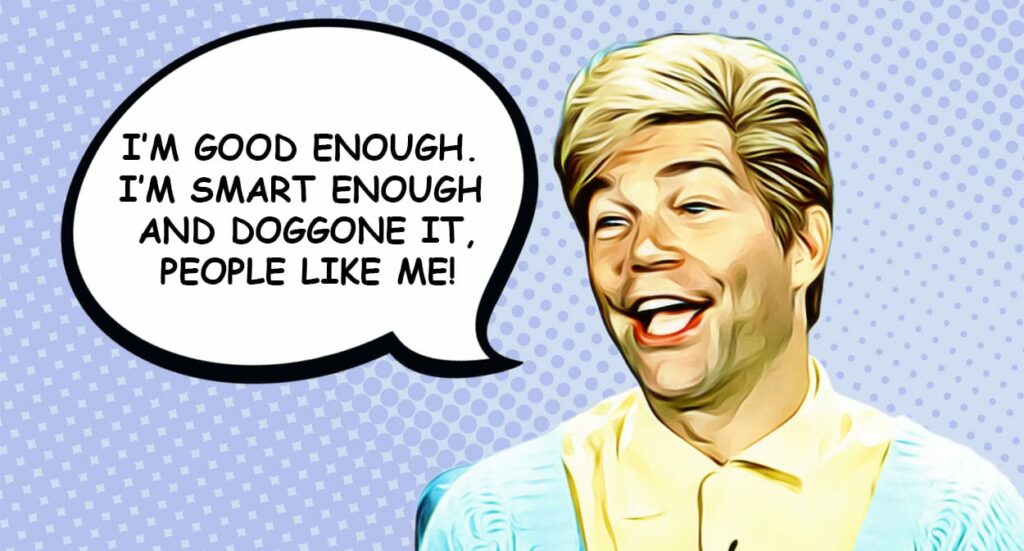 When I was a younger business person, I never thought much about mindset.

Meditation? Not for me. Visualization? No, thanks. Self-affirmation? Not a chance.

I think it was Stuart Smalley’s fault.

Remember him? He was a recurring character on Saturday Night Live in the 1990s. Al Franken played the part before he left SNL to become a politician.

Poor Stuart was a mess: “A caring nurturer. A member of several 12-step programs. But NOT a licensed therapist.”

He hosted a show called “Daily Affirmation with Stuart Smalley.”

He opened each show by staring in the mirror and sheepishly saying, “I’m going to do a terrific show today. And I’m gonna help people. Because I’m good enough. I’m smart enough. And doggone it, people like me!”

Most episodes ended with him saying, “OK…this has not been my best show…But that’s OK…”

And then he’d repeat that thing about being good enough and smart enough.

Back in those days various friends, advisors, and mentors encouraged me to focus on the “inner game.” Adopt practices to build confidence, quiet self-criticism, clear the noise, embrace calm.

When they suggested that stuff, I pictured Stuart Smalley, and thought, “I’m not THAT guy. Not for me. No thanks. Not a chance.”

Good thing I got over that.

These days I have a bagful of tricks to master the inner game. To keep my head on straight. To stay focused. To quiet my demons.

Here are just a few:

Before I conduct a sales consultation or public presentation, I repeat self-affirmations (without a Stuart Smalley mirror). I picture the moment when prospects commit to buy. I imagine the conversation with my wife when I tell her about that day’s successes.

That boosts my confidence and control.

I treat deep breathing as an exercise — part of my daily routine.

It helps me control my thoughts and clear the junk from my head.

I used to roll my eyes and laugh at this inner game stuff.

But no longer because this stuff works.

I know so many business people who appear, on the outside, to be in total control. But on the inside, they’re as messy as Stuart Smalley.

They suffer from imposter syndrome. They crave progress but they don’t know where to begin. Their negative self-talk distracts them and destroys their focus. It paralyzes them.

We invest time and dollars to learn all the best sales and marketing strategies. We pay to employ the most powerful tools and tactics.

But so many don’t invest in themselves to master the inner game.

If you don’t master the inner game, if you don’t have the confidence, if you can’t find the calm, if your head is full of junk…

…and I got unstuck.

Try it. No one will laugh and roll their eyes at you.

Good Examples | Journey to the Past | Mindset - Inner Game